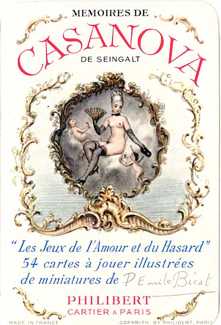 Following the success of the Florentin pack in 1954, the Paris-based playing card manufacturer Éditions Philibert commissioned Bécat to produce another set of illustrations for a de luxe Mémoires de Casanova pack. Many of the illustrations for the Casanova pack came from material he had amassed over a lifetime of creativity, and it was published shortly after his death. The Casanova cards were produced to a high standard, with gilded edges.

Twelve thousand sets were produced, and again sold very quickly. As with the Florentin pack, each of the court cards can be read both ways up.