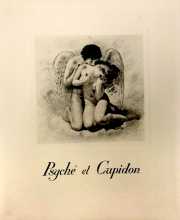 By the mid-1950s, and with eighty illustrated books to Bécat’s credit, quality French publishers were scraping the barrel to find appropriate texts for him to illustrate. This edition of La Fontaine’s retelling of the story of Cupid and Psyche, originally from the second-century Metamorphoses or The Golden Ass of Lucius Apuleius Madaurensis, just about makes the grade.

The tale concerns the overcoming of obstacles to the love between Psyche (‘soul’ or ‘breath of life’) and Cupid (‘love’ or ‘desire’), and their ultimate union in a sacred marriage. From the rediscovery of Apuleius’s works during the Renaissance, the story has been retold many times in poetry, drama, opera, painting and sculpture. Jean de La Fontaine’s (1621–95) poetic version, Les amours de Psyché et de Cupidon, was first printed in 1669, and was much used in later adaptations of the story.

Bécat’s trademark drypoints make the most of the universal nudity of classical mythology, with an emphasis on shapely breasts and bottoms.

The Bécat-illustrated edition of Les amours de Psyché et Cupidon was published by Les Heures Claires in a limited numbered edition of 500 copies.