The Adventures of a Lesbian College School Girl 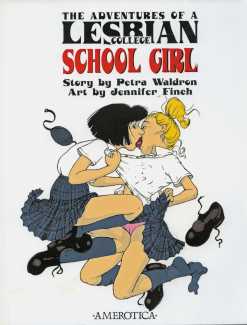 We decided to include The Adventures of a Lesbian College School Girl both because it appears to be one of the few lesbian comic books published in the 1990s, and because of the skilled quality of the artwork. The storyline is straightforward – eighteen-year-old Petra dreams about exploring her lesbian fantasies, which with the help of new schoolfriend Jennifer she manages to accomplish. Many might question the overuse of strap-ons during the process, but if that’s what turns you on so be it. The narrative is particularly good at managing the interplay between fantasy and its ‘real-world’ parallels.

That this comic is something of a one-off explains why it is cited in academic texts in both lesbian history (Lesbians in Television and Text after the Millennium) and education (Education in Popular Culture: Telling Tales on Teachers and Learners). Though probably bought at the time by male fantasists more than young lesbians, it holds enough truth to be, in its own terms, a fairly honest insight into teenage sexual development.

The title page says that this is just Volume 1, but no subsequent volumes ever appeared.

The Adventures of a Lesbian College School Girl was published under the Amerotica imprint of NBM Publishing.