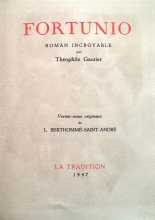 French romantic writer Théophile Gautier’s 1836 novel Fortunio, originally entitled L’Eldorado, tells of the mysterious Fortunio, ‘son of the East’, who creates for himself an oriental paradise in the heart of Paris, and whose protegés, the dandy George and Musidora, ‘she of the beautiful sea-green-eyes’, are left to wonder what of Fortunio’s world is real and what is fantasy.

Berthomme Saint-André was commissioned to illustrate Fortunio in 1946, following in the footsteps of Gerda Wegener and Paul-Émile Bécat. His illustrations are skilful, but lack the atmosphere and detail of his predecessors; nobody has illustrated Fortunio better than Wegener – you can see her versions here.

The Berthomme-illustrated edition of Fortunio was published by La Tradition in a limited numbered edition of 290 copies.

We are very grateful to Pierre-Antoine d’Entrecasteaux of La Plume du Sud for these illustrations.