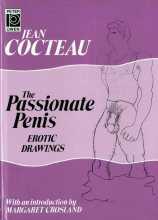 It was not until thirty years after Cocteau’s death that a comprehensive collection of his homoerotic drawings was brought together, and that thanks to pioneering London publisher Peter Owen and Cocteau’s biographer Margaret Crosland. The Passionate Penis showcases 56 drawings, mostly in dark pencil, spanning Cocteau’s artistic career from the 1930s to the 60s, as the review in Boyz magazine commented, ‘putting the cock solidly in Cocteau’.

Poet Stevie Smith wrote of Cocteau in her Daily Telegraph review of The Passionate Penis, ‘Exciting in its mixture of fantasy, horror and hilarity; for those who relish a strange flavour and can trouble to find beneath a parrot-bright surface a truthfulness as firm as it is sinister, this is the book.’

Another three decades on, Cocteau’s magnificent cocks still inspire wonder and envy, and we can share his delight in portraying as many as he could lay his hands on.