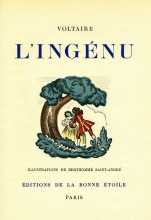 ‘Ingénu’ is French for ‘ingenuous’ or ‘artless’, so Voltaire’s 1767 satirical novella L’Ingénu, about a young American native who knows nothing of the intricacies of French culture, has been translated into English under various titles including The Sincere Huron, Pupil of Nature and Master Simple. It tells the story of a Huron called ‘Child of Nature’ who, after having sailed the Atlantic to England, crosses to Brittany in the 1690s and is assumed to be French.

Having grown up outside European culture, he sees the world in a literal, ‘natural’ way, causing him to interpret things directly rather than what is customary, which leads to comic misinterpretations. After reading the Bible, he feels he should be circumcised and calls upon a surgeon to perform the operation, which is stopped through the intervention of his adopted family. After his first confession, he tries to force the priest to confess as well. Not expecting to be baptised in a church, the villagers find Child of Nature waiting in a stream, as baptisms are depicted in the Bible.

The story satirises religious doctrine, government corruption, and the folly and injustices of French society. It also criticises contemporary corruption in the French government. Child of Nature, on his way to receive accolades for helping fight off a British seaborne assault, is wrongly imprisoned as a Jansenist after showing sympathy to the plight of those fleeing religious persecution. He spends a great deal of time in prison, until his lover – having been sent to a convent for four years – journeys to Versailles to discover his plight. To secure her lover’s release, she must succumb to the advances of a government minister. She seeks guidance from the confessor, but he says she must have misunderstood the minister’s deal, and that whatever he was suggesting must be for the best given that he is related to the king’s confessor. She eventually gives in for the sake of Child of Nature, but dies of an illness shortly after they are reunited.

L’Ingénu was published by Éditions de la Bonne Étoile in a limited numbered edition of 2,500 copies.