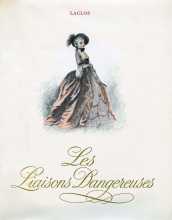 Les liaisons dangereuses (Dangerous Liaisons) by Pierre Choderlos de Laclos, first published in 1782, tells the story of the Marquise de Merteuil and the Vicomte de Valmont, two rivals and ex-lovers, who use seduction as a weapon to humiliate and degrade others, all the while enjoying their cruel games and boasting about their manipulative talents. It has been claimed to depict the decadence of the French aristocracy shortly before the French Revolution. It is an epistolary novel, composed entirely of letters written by the characters to each other. The letters between Valmont and the Marquise drive the plot, with those of their victims and other characters serving to give the story background and depth.

Laclos’s groundbreaking novel was an obvious choice for a Bécat commission, and a two-volume edition was published in the Collection Athéna-Bibliophile by Éditions Athéna. The illustrations are classic Bécat, helped by being in colour and hindered by being printed offset rather than from the drypoint plates.

The Bécat-illustrated Les liaisons dangereuses was produced in a limited numbered edition of 979 copies.