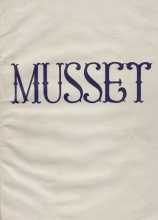 The early 1950s were clearly pregnant with a need for erotic stimulation of the kind offered by Gamiani, since this is one of two anonymously-illustrated versions to appear at around the same time; the other is here . Gamiani was first published in 1833, and is generally believed to have been written by Alfred de Musset. Subtitled ‘Two Nights of Excess’, and based on de Musset’s experiences with George Sand and her lesbian lover, Gamiani opens with Alcide watching Countess Gamiani and her young lover Fanny enjoying one another’s bodies. Very much aroused, Alcide reveals himself and joins them, and they spend the rest of their time together sharing their intimate stories and re-enacting scenes from them. The unsigned plates from the first illustrated edition of Gamiani have been variously attributed to Achille Devéria and Octave Tassaert.

This anonymous set of coloured illustrations is naive bordering on crude, but though the drawing is mediocre the watercolour treatment is competent, and they do have a certain innocent charm, which makes the scenes with donkey and monkey particularly amusing. Published in a card folder in a limited edition of 250 copies ‘Aux dépens des deux cent cinquante amis de l’époque romantique’, no publisher, date or place are given, though the limitation text is in French so it was probably produced in Paris.