Ink is My Blood Volume 1 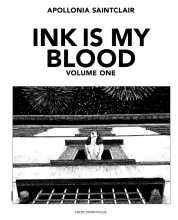 For the first five years of publicly displaying her work, Apollonia Sinclair relied on building an online audience, primarily through Instagram. Despite a censorship run-in with Instagram she had more than 125,000 followers by 2017, but always felt constrained by the limitations of the small screen, especially as her drawings became more detailed and complex. So it was that in 2017 she and her publishing partner e-sympathique launched a crowdfunding project to produce her work in book form.

As she wrote in the proposal, ‘Since I started sharing my drawings on social networks, a growing number of fans have asked me to print my work on paper. It is a tempting idea because, although I love the speed of the net, not only does the paper have unlimited patience, but it also allows me to publish my drawings in large format and highlight the details that get lost on a smartphone screen. So, after hundreds of drawings scattered on social networks, I’ve decided to publish, with your help, my first book.’

The first volume, covering her work from 2012 and 2013, includes more than 120 drawings, together with accompanying texts by film producer Erika Lust, artists Evelyn Wang and Adeline Wessang, and academic Thomas Selzam.

The portfolio shown here has been selected from Volume 1 by Apollonia as some of her favourites.