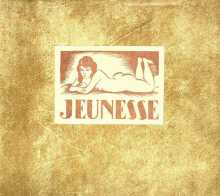 Jeunesse (Youth) is a portfolio of twelve colour plates by Collot, produced in a tiny edition of sixty copies ‘for circulation among his friends’. At thirty-six, he was maybe looking back at his more youthful sexual encounters, taking the opportunity of being a successful illustrator free enough of financial concerns to be able to produce images directly from his own imagination without the constraints of an external commission. And he certainly had a vivid imagination, though it is important to remember that 1933 Paris was a hotbed of sexual experimentation, so it is not surprising that Collot felt free to explore sex toys, same-sex couplings, even the introduction of pets.

The clean lines and carefully-placed patches of colour are characteristic of his mature illustration style, and show him at the height of his graphic skill.