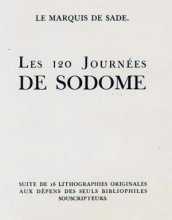 Although Les 120 journées de Sodome was first published in 1904, it was a poor edition; the Sade specialist Maurice Heine used the original manuscript, bought in 1929 in Berlin for the Vicomte Charles de Noailles, to produce the 1935 version. It was given an introduction and particular care was given to the printing, so in most respects this is the true first edition.

André Collot’s witty monochrome illustrations, which were commissioned as a separate suite to accompany the books, are the perfect complement to Sade’s narrative.