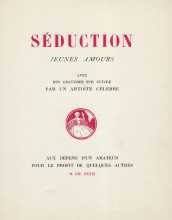 Séduction: jeunes amours (Seduction: Young Lovers) is the second version of this title to be produced, four years after the first. This time in colour, it again shows young people engaging in a variety of sexual activities and more or less enjoying themselves. As with the earlier version, the artist is not named on the title page – they are just ‘un artiste celébre’.

Even though now in colour, the illustrations are much more pedestrian than the imaginative scenes of the 1935 Séductions; it may be that Collot was attracted as much by the funds provided by the ‘amateur’ who sponsored this project as by the subject matter. The same sponsor probably provided the  accompanying rather nondescript text to the new version.

Like the 1935 edition, this version of Séduction was produced ‘Aux dépends d’un amateur pour le profit de quelques autres’ (at the expense of an amateur for the benefit of several others), this time in a limited numbered edition of just 99 copies.