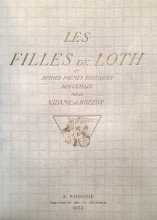 Les filles de Loth, et autres poémes èrotiques (Lot’s Daughters, and other erotic poems), gives its author as ‘Le Vidame de Bozegy’ and its place of publication as ‘Sodome’; the true identity of its author is Edmond Dardenne Bernard, and it was undoubtedly published in Paris. Bernard was not even the original source of much of the text; during the first decades of the twentieth century he was the collector and compiler of the Anthologie hospitalière et latinesque: recueil de chansons de salle de garde, anciennes et nouvelles, entre-lardées de chansons du Quartier Latin, fables, sonnets, charades, elucubrations diverses, etc (A Hospitality and Latin Anthology: a collection of songs from the guard room, old and new, larded with songs from the Latin Quarter, fables, sonnets, charades, various rantings, etc), published in two volumes in 1913; it is from these volumes that the bulk of Les filles de Loth originates.

Les filles de Loth was produced in a limited numbered edition of 500 copies.