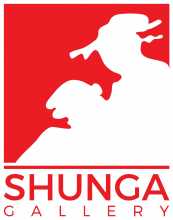 Over the next two decades Marijn’s shunga content was removed from several platforms including YouTube and Tumblr, and it became increasingly clear to him that there wasn’t anywhere where artists and lovers of shunga and related sensual art could freely share and express these interests, somewhere to enjoy the aesthetics of shunga without restraint.

So in 2016 he started the website and blog Shunga Gallery, which has now published more than six hundred articles and five eBooks. The growing interest in his mission can be seen in the number of new subscriptions to the email newsletter. In 2020 the number of new daily subscriptions more than doubled. In 2021 Shunga Gallery will be adding a forum, a unique shunga price indicator, and new eBooks.

Japanese shunga and the West

The symbiosis and exchange of ideas between artists worldwide has existed for a very long time, helped enormously by the invention of the printing press. This was no different within artistic communities in both East and West, but over time the exchange between East and West gradually increased. Interestingly it was the secluded Japanese who came into contact with Western art first, rather than the other way around.

For over 250 years from the mid-seventeenth century, Japan’s only window to the outside world was Deshima in Nagasaki Bay, and Japanese artists had very little exposure to Western art. The artificial island of Deshima was populated exclusively by the Dutch, so it was the books of copper engravings brought by Dutch traders that were viewed with great interest by local artists. It wasn’t long before Japanese artists started to try out some of the innovations they saw.

It is quite likely that Kuniyoshi came across the caricature of Abbot Jean-Sifrein Maury (L’Abbé Mauri), a head created on the principle of phalluses substituted for the nose, lips, hands and neck, which gave him the idea for his yose-e design ‘He Looks Scary but is Really Quite a Nice Person’.

The second was the prolific and outstanding Meiji shunga artist Kawanabe Kyōsai (1831–89), who produced four luxurious scroll prints depicting orgiastic scenes of men in Western-style clothing and women in both Japanese and Western-style dress, with in the background European-style sculptures and weird imagery including a European couple making love on top of an elephant.

The influence of shunga on European art

As Japanese art, known as Japonisme, appeared and spread in France during the late 1860s, the appeal and attraction of shunga, first to French and later to other European artists was enormous. Artists experimenting with new styles and subjects loved the uninhibited freedom and naturalness with which shunga represented sexual liaisons. The discovery of such prints facilitated a new vision of eroticism and representation of sexuality, which became increasingly visible in the works of many avant garde artists from the 1870s and 1880s onward.

One of the first painters to explore the connection between eroticism and Orientalism was Jean-Auguste-Dominique Ingres, especially in his acclaimed images of nude odalisques. His early sketches demonstrate that the anatomical disparity of this odalisque – her leisurely extended body painted in a Mannerist style – was done intentionally in order to intensify the sensuality of a scene reminiscent of the exotic ‘oriental’ realm of harems and concubines.

Another artist who was greatly impressed by Japanese art, and who was an avid collector of Japanese prints and books, was the French impressionist Edgar Degas. He was one of the artists who best combined the lessons of Japanese art into his own personal view on the modern world and into his artistic methodology. Many of Degas’s nude and semi-nude women evoke a sense of eroticism in the gestures and positioning of the figures set in scenes of enduring movements which are strikingly close to ukiyo-e prints portraying women bathing.

Many artists of the late nineteenth and early twentieth century were influenced by Japanese shunga art, including Impressionists such as Rodin, Degas and Manet, and artists of the Vienna Secession like Gustav Klimt and Egon Schiele, not to mention Aubrey Beardsley, Edoardo Chiossone, Félicien Rops, and members of the German art movement Die Brücke.