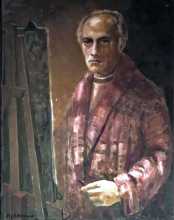 Anatola Soungouroff grew up in Reval, near Tallinn in Estonia, and having shown an aptitude for art moved to France in the mid-1930s, where he quickly became well known for his portraits of handsome young men, in particular the inhabitants of Paris and of Cannes on the French Riviera.

Undoubtedly gay himself, Soungouroff was known predominantly as an artist who dealt unabashedly with themes and images relating to gay life and culture. Though his prolific output included women and girls, and some religious images, he was predominantly a painter of beautiful boys, haunted by a particular type of young man with full lips and wistful eyes. As he wrote of his subjects, ‘My sailors, my fishermen, my gypsies, my legionnaires, my St Sebastians, are all to some extent absent and distant, but they are all beautiful’.

His early career from 1942 to 1960 was very successful, exhibiting regularly at the Berhein Gallery in Paris and Gallery 20 in Cannes. He was friends with many prominent writers and artists, including Jean Cocteau, Christian Berard and Roger Peyrefitte. 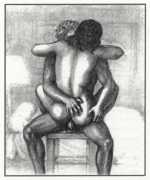