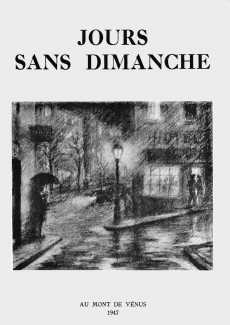 Jacques woke up suddenly. A warm weight rested on his belly, a warm, damp circle surrounded his penis. Instinctively he moved back. The mouth returned his cock to its own devices, and slowly his neighbour’s head returned to the pillow and rolled on his shoulder.
Jacques could not move, he was right up against the wall. Gently a hand caressed his belly, descended lower, lingered. ‘A pederast,’ was his first thought. He had often heard about it in the village, at school, warned by other kids.
The boy crept up against him, put his arm around his waist. The other hand continued the pervasive, caressing massage. Jacques closed his eyes. It was too late to fight against the pleasant sensation which put his fears to rest and awakened his stiffening sex.

Jours sans dimanche (Days without a Sunday) appeared during a period in the 1940s and early 50s when gay literature – important works by Jean Boullet (Tapis volant, 1945; Les beaux guys, 1951; Antinoüs,1954), Jean Genet (Notre-Dame des Fleurs, 1943; Miracle de la Rose, 1946; Vingt lithographies pour un livre que j’ai lu, 1948), Eric Jourdan (Les mauvais anges,1955), and Marcel Jouhandeau (Tirésias, 1954) – was bringing the French urban gay scene to life. The short novel recounts the sexual adventures of Jacques, a young man well endowed by nature, who leaves his rural home to work with his aunt in Paris. His aunt takes him firmly in hand, and during the course of the narrative he learns all the ways in which sex can be experienced. Jours sans dimanche stands alone by virtue of being the only quality narrative of the period to include both heterosexual and male and female same-sex scenes – something for all tastes.

The author is given as Guy de Hautefeuille, a pseudonym for an author that has never been identified; the publisher, Au Mont de Venus (The Mound of Venus), is likewise unknown.

As far as we know this is the only text to be illustrated by Anatola Soungouroff, who was probably influenced in his decision by seeing his friend Roland Caillaux’s illustrations for Jean Genet’s Vingt lithographies pour un livre que j’ai lu, which you can see here. They are also his most explicit works, which explains why his name does not appear.

If you can read French, the excellent website at Bibliothèque Gay has at extended article about Soungouroff and Jours sans dimanche, which includes an extended extract. You will find the article here.