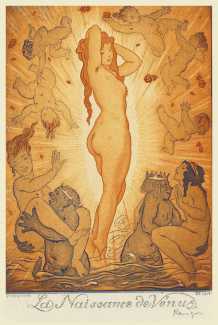 André Lambert was born in Stuttgart into a family of architects. He became the student of the influential painter Hugo van Habermann in Munich, and then of Fernand Cormon at the École des Beaux-Arts in Paris. He was particularly influenced by the work of Aubrey Beardsley, who he saw as the future of graphic art. Lambert also immersed himself in the classics, becoming fluent in Latin and studying Greek and Roman art. His knowledge of the antique world coupled with his artistic training gave rise to the particularly intimate style which would become his own.

After several years in Germany during which he collaborated on the satirical graphic review Simplicissimus, he moved to Paris. In 1919, he founded the review Janus, which was written entirely in Latin, with Georges Aubault; his friend Émile Bernard participated in the illustrations. Having grown weary of the atmosphere in Montmartre he left the banks of the Seine, and after a visit to Spain moved there in 1920. The country became both his refuge and his source of inspiration.

The bibliophile Latinist expressed his creativity in illustrating the classics; among others he illustrated Hoffmann’s Tales for Briffaut in 1925 and Ovid’s Metamorphoses for Devambez in 1930. André Lambert devoted his days in his studio searching for a perfect form of illustration, the creation of a clear form emphasising the value of the antique legends and mythology. When not at his printing press he travelled the countryside, sketching villagers and landscapes. His talent as an engraver was much admired by other artists including Gerda Wegener and Édouard Chimot.

We know almost nothing of Lambert’s personal life beyond clues provided by his work. He produced very little after Les seuils empourprés; maybe he saw that achievement as the pinnacle of his artistic and personal journey. 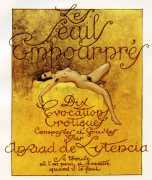