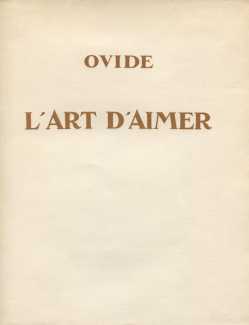 The Roman poet Ovid’s Ars Amatoria (The Art of Love or L’art d’aimer) is a classic of instruction about intimate relating, and even though written two thousand years ago (it is thought in 2CE) much of its teaching remains more or less pertinent, like not forgetting someone’s birthday and letting them miss you – but not too much.

Book One of Ars amatoria was written to show a man how to find a woman. In Book Two, Ovid shows how to keep her. The third book, written two years after the first books were published, gives women advice on how to win and keep the love of a man. Rather tongue in cheek, Ovid likens love to military service, requiring the strictest obedience to the woman. He advises women to make their lovers artificially jealous so that they do not become neglectful through complacency.

Throughout his ironic discourse, Ovid never becomes ribald or obscene. ‘Embarrassing’ matters cannot be entirely excluded, for praecipue nostrum est, quod pudet, inquit, opus (what brings a blush is our particular business here). Things always end up in bed, but here too Ovid retains his style and his discretion. The end of the second book deals with the pleasures of simultaneous orgasm – odi concubitus, qui non utrumque resolvunt (I don’t like intercourse that doesn’t make both lovers come).

Appropriately for its subject, the Ars amatoria is composed in elegiac couplets rather than the dactylic hexameters more usually associated with the classic Latin didactic poem.

Ovid was one of Lambert’s favourite classical authors, and his illustrations for L’art d’aimer demonstrate his mastery of the neo-classical style of illustration. Produced in collaboration with brothers Robert and Georges Briffaut at the prestigious Paris publishers Éditions Briffaut, this edition of Ovid is one of the highlights of a celebrated list. The only small issue is that the combination of Lambert’s brightly-coloured prints and the Arches paper used by Briffaut has resulted in a loss of definition over the years; here we have attempted carefully to demonstrate how Lambert’s plates might have appeared when they were fresh off the press.

The Lambert-Briffaut edition of L’art d’aimer was produced in a limited numbered edition of 500 copies.