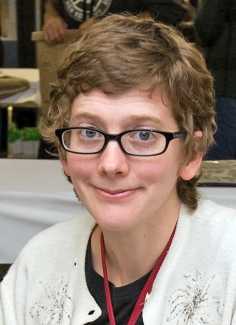 Coover followed up Small Favors with Banana Sunday, a light-hearted story of friendship and loyalty, with plenty of teen romance and angst – and talking monkeys.

Coover has contributed comic work to Out magazine and has contributed illustration and cover design for On Our Backs, Girlfriends, Curve, Kitchen Sink and Nickelodeon Magazine. Her publisher clients include Buckle Down Publishing, Alyson Books, Cleis Press and Dark Horse Comics. Her latest work is the graphic novel Gingerbread Girl, written by Paul Tobin. She and Tobin are currently releasing chapters of Bandette, a web-first comic series about a costumed teen burglar plying her skills on either side of the law alongside her network of street urchins, a thorn in the side of both Police Inspector Belgique and the criminal underworld.

Colleen Coover’s website can be found here, which has links to all her past and current projects.