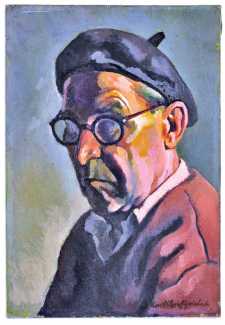 Curt Grosspietsch was born in Leipzig, the son of master painter Bruno Grosspietsch. After attending secondary school he began an apprenticeship as a painter and varnisher in his father's company and at the same time attended courses at the arts and crafts school in Leipzig from 1905 to 1911. From 1911 to 1914 he studied at the Dresden Art Academy with Richard Müller, Robert Sterl, Johannes Raphael Wehle and Oskar Zwintscher. Grosspietsch was friends with George Grosz and Otto Dix.

In September 1914 he was drafted, and in May 1915 was seriously wounded on the Western Front in Neuville. In 1919 he returned to Dresden and continued his studies until 1923, like Otto Dix, as a master student with Otto Gussmann. In 1921 he became a member of the artist group Die Schaffenden, along with Erich Fraass, Wilhelm Lachnit, Willy Illmer and Fritz Skade, and in 1924 joined the Dresden Art Cooperative. In 1925 he became a member of the Social Democrat Party, and worked as a draftsman for Dresdner Volkszeitung, Fliegende Blätter, and other satirical magazines.

In August 1927 he married Dora Franke, and their son Peter, who also became an artist, was born two years later. From 1930 to 1933 he was a member of the German Association of Revolutionary Visual Artists, and in 1933 some of his drawings were branded as degenerate. Like Otto Dix, during the Nazi era Grosspietsch was demoted to a landscape artist and only exhibited flower paintings. Since open resistance was no longer possible, Grosspietsch worked within the system to protect his colleagues from persecution. In 1944 Grosspietsch was again drafted, and was seriously wounded by a bullet in the chest in April 1945 fighting for Berlin in Spandau. After the war he carried out commissions as an exhibition designer and construction-related work, such as the design of the Hotel Astoria in Bad Gastein and the fresco paintings in the Forest Academy in Tharandt.

His early work clearly shows Curt Grosspietsch's share in Dresden's Neue Sachlichkeit (New Objectivity) movement, and in his graphic work he continued to explore a grotesque and surrealist romanticism. His work is populated by animal-human hybrid beings, water spirits, demons and devils, and social outsiders such as cripples, beggars, whores and clowns. Until the 1960s Curt Grosspietsch was regarded as a misunderstood artist, but his reputation has since been re-evaluated and seen as an important part of the development of German art in the twentieth century. 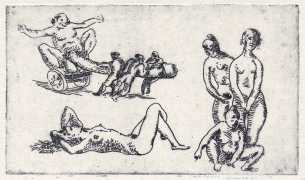 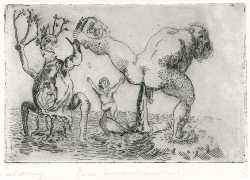 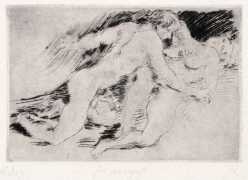 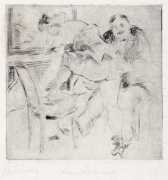