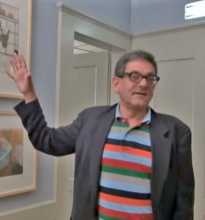 Painter and illustrator Dieter Hall grew up in the Swiss city of Zürich, and studied art history and German literature at the University of Zürich. After graduating in 1983 he moved to New York’s Lower East Side, where he worked with photographers Peter Hujar and Allen Frame, painter Hans Witschi, and actor and theatre director Terry Robinson, Hall’s longtime partner. In 2011 he moved back to Zürich, where he exhibits regularly and has held several scholarships; he now divides his time between Switzerland and New York

Hall is an experimenter, both of subject and medium, much of his work appearing naive, but by stressing the commonplace he helps his audience to concentrate and appreciate the beauty and meaning in the unadorned body, naked genitals, the seemingly banal landscapes. He has worked in watercolour and oils, and has created sculptures and other three-dimensional art objects. Portraits of gay male friends of different nationalities, usually depicted naked or semi-naked, form an important part of Hall’s work. These are not distanced, classical nude studies, but honest images of everyday homosexuality.