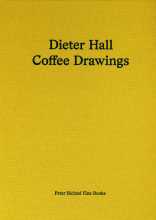 From 1984 until 2011 Dieter Hall lived in New York, and still shares his time between Switzerland and the USA. In 2002 he worked almost exclusively on a series of drawings of young men in various states of undress and arousal, in his hallmark style of showing them full frontal, warts and all. He called this portfolio his ‘coffee drawings’, as he experimented with using coffee as a watercolour medium to highlight the pencil drawings.

In 2013 Zürich gallery-owner and publisher Peter Bichsel arranged an exhibition of Hall’s ‘coffee drawings’, and produced a limited-edition book of 48 of them, which are shown here.

It is refreshing to see a collection of drawings of gay men just as they are, with no attempt at titillation or embellishment; it humanises them and makes them both approachable and attractive.

Coffee Drawings was produced in a limited, numbered, signed edition of 120 copies, of which 30 included an original signed drawing.