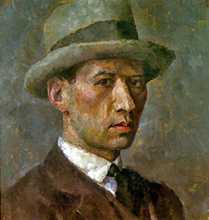 Eddy Smith was born Edmund Richard Max Smith in Hannover, into a family that had recently moved there from London. They moved to Berlin in 1900, where Eddy showed a talent for art and enrolled in the Königlichen Akademisch Hochschule für Kunst in 1912, studying with Georg Schäfer and Adolf Schlabitz.

His preferred medium was woodcut, which he first published in Das Neue Pathos in 1914. After serving in the First World War he reurned to Berlin and established himself as a painter, illustrator and printmaker.

As well as prints and paintings, Eddy Smith designed stamps, including the ‘Ebert’ and ‘Hindenberg’ series, and commemorative coins including the ‘Walter von der Vogelweide’ 3-mark piece of 1930. He was also active in stage design, working with Hans Poelzig in Potsdam, and films including a documentary about the composer Anton Bruckner. Portraits he painted in the 1930s include art critic and director of the Weimar Reichskunstwart (Cultural Council) Edwin Redslob, actress Gertrude Eysoldt, publisher Bruno Cassirer, art dealer and collector Alfred Flechtheim, and politician Ernst Reuter.

Eddy and Asta divorced in 1944, and three years later Eddy married Gertie Collins; they had a daughter who was just five years old when her father died. After his death Gertie wrote, ‘I believe it was the revolutionary style for which he was so single-mindedly searching that made him sick in the end, with a disease that destroyed his body but not his mind.’