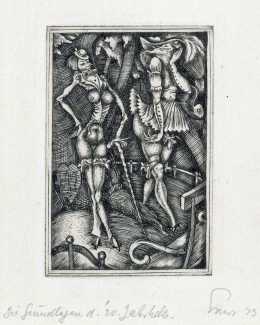 This portfolio of ten engravings from copper (Kupferstiche), created in Weimar Berlin as the city recovered from the First World War and around the time the artist was deeply in love (and presumably also in lust) with Asta von Friedrichs, is full of detail and telling symbolism. The suite is often called Die Grundlagen des 20 Jahrhunderts (The Foundations of the 20th Century) after the title of the first print, and sometimes Die Muse der Sodomie (The Muse of Sodomy), but neither title is the artist’s.

Here we have carefully-considered compositions engraved by a master of the art. Skeletal figures with deliberately large and deformed genitals occupy landscapes filled with machinery and angular foliage, which surely mirrors Smith’s artistic struggle to understand the juxtaposition of sexual intimacy and industrial efficency.

The titles of the ten prints are given below. It is worth knowing that Buridan’s ass, named after the fourteenth-century French philosopher Jean Buridan, refers to a paradox wherein a donkey that is equally hungry and thirsty is placed precisely midway between a stack of hay and a pail of water. Since the paradox assumes the ass will always go to whichever is closer, it dies of both hunger and thirst since it cannot make any rational decision between hay and water.