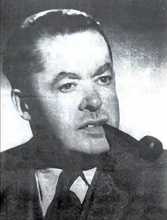 Étienne Le Rallic was one of the most prominent French realistic comic artists of the 1930s and 40s. His first drawings were published in Le Rire in 1910.

Le Rallic was fascinated by horses, which can be seen in much of his work. He fulfilled his military service with the cavalry, and made his first drawings of horses for army publications. Later he created humorous drawings for the magazines Le Pêle-Mêle, Le Sourire, La Chronique Amusant, Fantasio, La Baïonette, Le Régiment, La Vie Parisienne, Pages Folles, Bagatelle and Frou-Frou, sometimes using the pseudonym Smile.

In 1926 he started working in a more realistic style for the publishing house Montsouris, and illustrated novels for magazines such as Guignol, Lisette and Pierrot. In 1935 he collaborated with Marijac (Jacques Dumas) on Les premières aventures de Flic et Piaff, a black-and-white picture book published by Éditions Gordinne.

After this success, Le Rallic devoted himself more to comics. Starting in 1938, he contributed to a great variety of magazines, including Pierrot, Hurrah!, O Lo Le, Coq Hardi, Pic et Nic, Cadet Journal, France-Soir Jeudi, Sabord and Bob et Bobette. From 1945 to 1949 he worked exclusively for Gordinne, where his works remained in print until the mid-1960s.