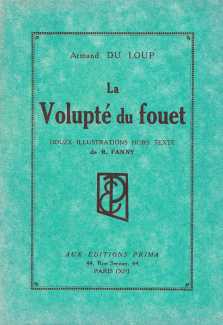 La volupté du fouet (The Pleasure of the Whip) is standard 1930s flagellation fare, better than many both in the quality of the writing and of the illustrations. The text is by one Armand de Loup, a pseudonym suggesting a predatory prediliction, ‘loup’ being the French word for wolf, and for a male heartthrob.

Though we have no clue as to the true authorship of the text, we do know that the illustrations, hiding behind the strange alias of ‘R. Fanny’, is Étienne Le Rallic, whose skill as a professional illustrator raises this edition above the usual mediocrity. As far as we know this is Le Rallic’s only foray into the flagellation genre.

We cannot resist sharing a sample of the racy text:

Janine sat on Levoultier’s lap, sought his lips, took them by force and applied her warm body, animated by a monstrous sensuality but so magnetic that the man could not resist. His desire awoke. Janine felt the indisputable proof against her hip, and seized it with a bold hand while her tongue in Levoultier's mouth exploited her advantage.
And everything happened as she had sought. Spurred by an exceptional surge of energy he stood up, lifted her body, threw it on the big four-poster bed, tore off her negligée, and tasting all her treasures took her savagely.
Never had Janine been loved with such brutality: she gave herself up completely with joy, experiencing a victorious spasm.
But not for long. Levoultier, his cravings appeased, was furious at his defeat. While he was adjusting himself, Janine, lying on her side, her buttocks open, offered a new opportunity.
‘Bitch!’ he exclaimed, and with his palm struck her naked backside hard.
She sat up, confused by the the enjoyment of her body and the offense suffered. ‘You brute!’ she cried.
‘Yes, I am a brute. But I know you want to be punished!’ And with a push he bent her over and resumed his spanking – a master spanking.