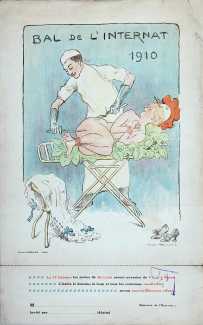 Gaston Trilleau is another early twentieth-century illustrator who has all but disappeared from history, all that is left to us being the few artworks of his that have survived.

He was clearly a competent artist, already considered well enough known in 1907 to be commissioned by the established clandestine publisher Charles Carrington to provide six etchings for an English-language edition of Pierre Loti’s amorous adventures, A Spahi’s Love Story. 1910 saw him producing this invitation for a costumed ball (or as the illustration suggests, a non-costumed ball), and bookplates and engravings from the 1910s and 20s show that he was a skilled and original engraver.

It has been suggested that sets of colour illustrations for a 1928 edition of Le doctorat impromptu and a 1929 edition of Le libertin de qualité are also by Trilleau, but given how crude they are compared with what we know can definitely be attributed to him, this seems unlikely.