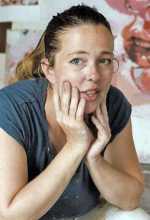 In October 2018 the London auction house Sothebys sold a 1992 painting by Jenny Saville, Propped, for £9.5 million (US$12.4 million), more than three times its presale estimate and the highest price ever paid for a work by a living woman artist.

On the Artlyst website, Sue Hubbard explains why Propped is one of the most significant paintings of recent decades (you can read the whole piece here): ‘She sits balanced on a high stool naked in front of a mirror, her white sling-backs hooked around its slender neck to balance her heavy body. Her bulbous breasts hang to her waist. Her head is thrown back, eyes closed, hands clawing at the flesh of her ham-like thighs. Scribbled into the paint, in mirror-writing like graffiti reminiscent of Cy Twombly’s scrawls, are gobbets of text by the Belgium feminist writer Luce Irigary that say “ If we continue to speak in this sameness – speak as men have spoken for centuries, we will fail each other”. In Propped, the paint becomes flesh; at once beautiful, vulnerable, excessive and verging on the abject. It delivers a punch that is at one and the same time, psychological and physical. As a self-portrait, the work is revealing and brave, but it also has a raw vulnerability. Saville’s fingers scratch at the ample flesh of her thighs as if to draw blood, do harm and in, someway, punish herself. There’s self-hatred here as well as self-confidence – all expressed through the most classical medium of paint.’

Jenny Saville is one of the original members of the group which called itself Young British Artists. She grew up in Cambridge, and Newark in Nottinghamshire, and in 1988 moved to Glasgow to take a Bachelor of Fine Arts degree at Glasgow School of Art. After she graduated in 1992 she was awarded a six-month scholarship to the University of Cincinnati, where she enrolled in a course in women’s studies.

At the end of Saville’s undergraduate education, the leading British art collector Charles Saatchi purchased the whole of her degree exhibition, and when she returned to England offered the artist an eighteen-month contract, supporting her while she created new works to be exhibited in the Saatchi Gallery in London. The collection, Young British Artists III, was exhibited in 1994 with Saville’s 1993 self-portrait, Plan, as the signature piece. Rising quickly to critical and public recognition, Jenny Saville has continued to create innovative art through the use of a classical genre, figure painting, but with a highly original approach.

Saville’s art focuses on women’s bodies, and is a far cry from most works of the female form, which tend to objectify women. She is more interested in the raw and unaltered female form, and the valuable reactions of disgust which are generated when viewing her pieces. Her body of work therefore challenges traditional representations of naked women, and especially the modern-day filtered and perfect body image. She does this by focusing on the bumps, dimples, rolls and contours of women’s bodies and flesh, representing some of the supposed imperfections that have been excluded in traditional depictions of naked women.

Her unconventional approach to beauty explores the links between nakedness, gender politics, sexuality and self-realisation, depicting disquieting female bodies which provoke interest, confusion, questions and excitement. Saville’s luscious treatment has elicited comparisons with the British painter Lucian Freud. As she explains, ‘I paint flesh because I’m human. Flesh is just the most beautiful thing to paint.’ 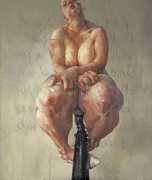 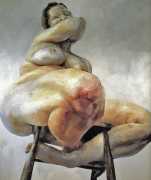 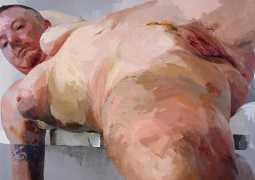 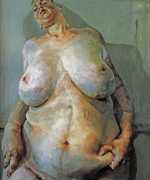 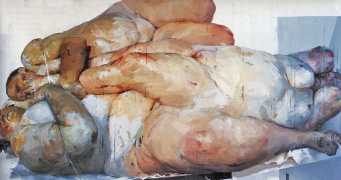 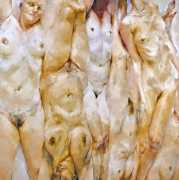 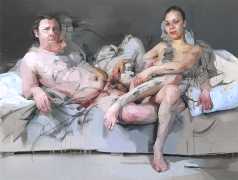 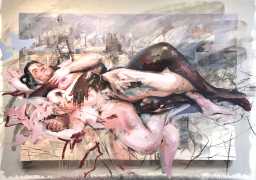 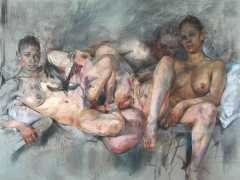 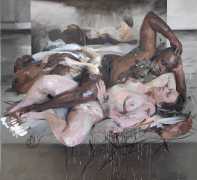 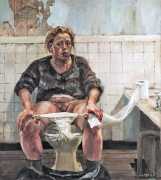 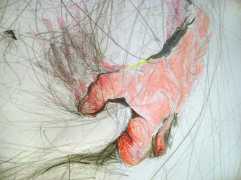 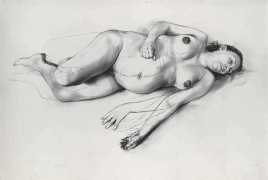 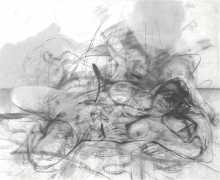 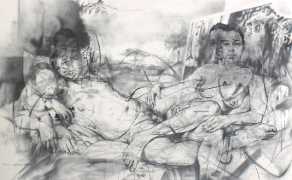 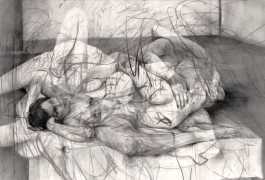 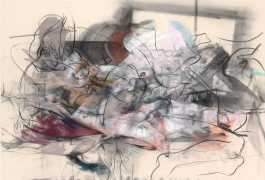 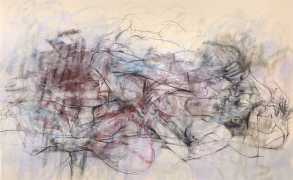 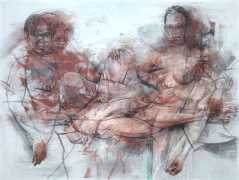 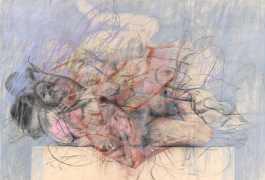 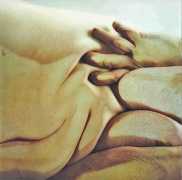 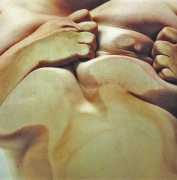 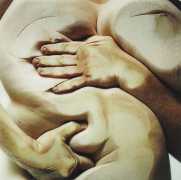 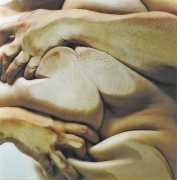 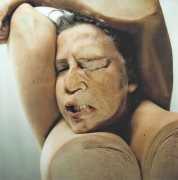 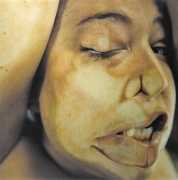