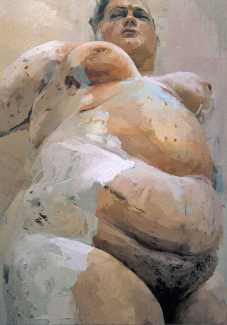 In her paintings Jenny Saville borrows conventions from a long tradition of figure painting, whether in poses borrowed from the madonna and child paintings by Leonardo da Vinci, the use of a colour palette reminiscent of Peter Paul Rubens, or the gestural painting of Willem de Kooning in his ‘Woman’ series. Saville appropriates these techniques associated with male masters to balance them her own point of view as a woman. Her focus has always been the female body, though as she says ‘I’m drawn to bodies that emanate a sort of state of in-betweenness – hermaphrodite, transvestite, half-alive/half-dead’. Saville’s painterly style has been often been compared with that of Lucian Freud, famous for his conventionally unflattering depictions of naked models.

In her depictions of the human form, Jenny Saville transcends the boundaries of both classical figuration and modern abstraction. Oil paint, applied in heavy layers, becomes as visceral as the flesh, each painted mark maintaining a supple, mobile life of its own. As Saville pushes, smears, and scrapes the pigment over her large-scale canvases, the distinctions between living, breathing bodies and their painted representations collapses.

In an interview for the Saatchi Gallery, Saville explained ‘I have to really work at the tension between getting the paint to have the sensory quality that I want, and to be constructive in terms of building the form of a stomach, for example, or creating the inner crevice of a thigh. The more I do it, the more the space between abstraction and figuration becomes interesting. I want a painting realism. I try to consider the pace of a painting, of active and quiet areas. Listening to music helps a lot, especially music where there’s a hard sound and then soft breathable passages.’

There is a mundane reality to many of Saville’s paintings, a challenge to see and accept women’s bodies as they are rather than how they are supposed to be, and she challenges her audience to be as honest about their own physicality as she is. She must be one of the very few artists to paint herself sitting on the toilet.