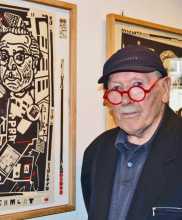 Johannes Vennekamp is a self-taught graphic designer and printmaker with a style which is uniquely his. Using found graphic elements and typography to add to his colourful compositions, he has found a way of creating a commentary on cultural, social and political issues which is both artistic and thought-provoking.

He spent his early years in Istanbul (then Constantinople) in a German family stationed in Turkey, before returning to his family home in Berlin as a student. His first solo exhibition, mostly of paintings, was in 1959 in Ravensburg. In 1963, under the patronage of Günter Bruno Fuchs, he founded the Rixdorfer Drucke workshop in Berlin together with Uwe Bremer, Albert Schindehütte and Arno Waldschmidt. In 1970 he won a prestigious prize for his prints at the Krakow Biennale.

In 1974, along with the Rixdorfer Drucke workshop, he moved to Gümse on the River Elbe, and since then has divided his time between Berlin and Gümse. In the period after the move to Gümse he started one of his best-known series of prints, portraits of musicians printed on music paper. The musical theme continued with his 1981 ‘Paraphrases to Wagner’ and the 1984 ‘Jazz Museum’.

In 1989 the Rixdorfer Drucke artists dedicated an exhibition to football at the Kunstverein Elmshorner Torhaus under the title Zum Ballspiel, and in 2001 Vennekamp exhibited a solo exhibition on the subject of cars, ‘Auto’, at the Torhaus. Several recent exhibitions explore the world of technology and its influences on society, such as his ‘Info-Company’ series from 2001–3.

Literary texts have always fascinated Vennekamp, especially those with an edgy social theme. His La galère of 1969 and Sade portfolio of 1972 are the outstanding examples.