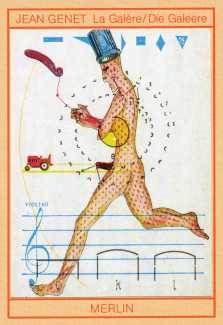 Genet’s La galère (The Galley) is a long poem about a virile murderer who is transformed into a tragic ‘queen’ in a fantasy involv­ing a galley ship transporting prisoners to a penal colony in Guyana. It was first published in 1947 by the Paris bookseller Jacques Loyau in a small limited edition, with six engravings by Leonor Fini, which you can see here.

The language of the poem is complex and opaque, so the production of a parallel French-German edition was a challenge for Gerhard Edler who translated Genet’s text into German. There is a good English translation by Mark Spitzer on the internet, here. The poem opens like this:

A liberated convict, hard and ferocious, flings
a galley-slave into the yard
but with a flourish of sword
the pimp, Southern Cross
and the murderer, North Pole
remove from an other
his earrings of gold.
The most beautiful are flowering
with strange maladies.
Their guitar-butts burst in melody.
The foam of the sea wets us with spit.
Are we cast up
from the throats
of a pasha?

Genet’s poem clearly appealed to Vennekamp, whose eighteen plates mirror the complexity of the poem with equally dense images, conveying many of the themes of the poem including sexuality and nautical imagery.