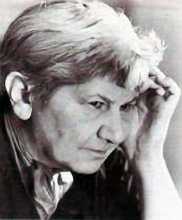 The painter, printmaker and illustrator Katerina (Käte) Wilczynski was born in Poznań in Poland, but spent a large part of her life based in Britain. Although she painted portraits and cityscapes throughout her career, she is best known as a landscape artist.

Wilczynski spent extended periods of her early life in Berlin. She studied art in Leipzig in 1916 and 1917 and then in Berlin during 1918, before moving to Paris where she undertook freelance work. In 1930 she won a Prix de Rome scholarship, and used the funds to move to that city. While in Rome she drew churches and monuments, before in 1939 moving to London. During the Second World War Katerina Wilczynski drew buildings and landmarks damaged by bombing, and contributed pieces to the war artists exhibitions held in the National Gallery.