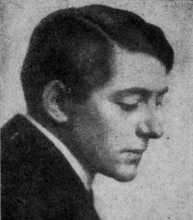 The German writer Waldemar Bonsels (1880–1952) is best known for the 1912 children's book Die Biene Maja und ihre Abenteuer (The Adventures of Maya the Bee), which was widely-translated and is the inspiration for a Japanese animated television series and a Croatian children’s opera. But he also wrote a number of novels and shorter stories dealing with love both as Eros and the higher level of divine love, the relationship between humanity and nature in a simple life unchanged by modern civilisation, and a historical novel about the time of Jesus. He grew up in the small town of Ahrensberg in north Germany, and spent much of his life in Berlin. 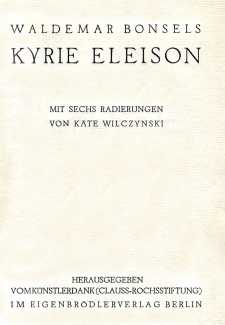 Bonsels was also interested in the nature of crime, especially sexual crime, and in 1909 wrote the short novel Kyrie Eleison, about the murder of a young woman in unexplained circumstances. In 1920 the novel was banned, but this privately-published edition was produced two years later, stating clearly that ‘It is not intended for the general public’. The six stark engravings by Käte Wilczynski are similar in style to those of May den Engelsen.

Maybe not out of character, Bonsels was an outspoken anti-Semite, and expressed his approval of Nazi politics against Jews in a widely-published article in 1933, calling Jews ‘a deadly enemy who are poisoning our culture’.

Kyrie Eleison was published by Eigenbrötler Verlag, Berlin, in a limited, numbered and artist-signed edition of 100 copies.