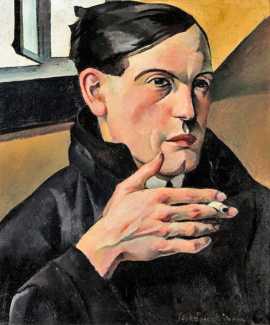 Marcel Stobbaerts could hardly fail to become an artist, as his grandfather was the great Jan Stobbaerts, a pioneering and much-admired Belgian artist with a street in Brussels named after him. Though his family wanted him to direct his artistic talents towards architecture, his free spirit prevailed and, self-taught with input from Constant Montald’s drawing classes, he managed to live by his painting. In 1928 the art critic Jan Greshoff wrote of him, ‘What strikes me about Stobbaerts is his nervous energy, which gives his work something astonishing and fascinating. It is as if his nerve fibres run into the hair of his brush. To paint like this must sometimes be a lust and sometimes a physical pain. The dominant impression that his work gives is that of a skittish, angular mobility. He is too intelligent and restless to accept a stable set of insights and beliefs. Everything in and about him vibrates.’

We are therefore fortunate that one of the avenues that Stobbaerts chose to explore was book illustration, to which his ‘skittish, angular mobility’ was well-suited. His first commission was for the cover of the 1923 wartime memoir, Michel de Ghelderode’s L’homme sous l’uniforme (The Man under the Uniform), and in 1929 he produced the woodcuts for Léon Daudet’s Notes d’un exilé (Notes of an Exile). In 1930 the Belgian publishing company Stols commissioned Stobbaerts to illustrate Francis Carco’s Les enfants du malheur (The Children of Misfortune), and it was about this time when either Stobbaerts, Stols, or both, became aware of the publication a couple of years earlier of Pierre Louÿs’ Pibrac. By this time Stobbaerts was strongly under the influence of art deco and cubism, especially the work of Picasso, and the combination of subject matter and style clearly appealed to him, resulting in one of the best and freest period interpretations of an erotic text.

A similar free spirit is evident in Stobbaert’s best-known work, his Arène du Nord (Northern Arena) of 1926, painted for the Belgian exhibit at the Bern International Exhibition. His other works include many landscapes of Belgium and northern France, and several nude studies. We know little about his personal life, except that he married a French woman, Marie Lebeau, in 1930. Whether or not it is a coincidence that this was also the year of the Pibrac illustrations we cannot know, but it is clear that his openness to the artistic influences of the time encouraged his free spirit towards experimentation and inventiveness.