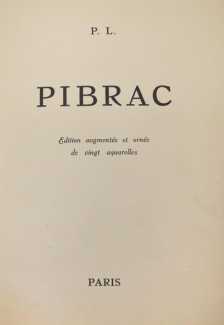 Like the rest of Pierre Louÿs’ voluminous output of erotica, Pibrac (sometimes spelt Pybrac) was not published during his lifetime, but instead figured among the many secret manuscripts discovered after his death, tucked and filed away, and subsequently auctioned off and scattered among collectors. It would see its first clandestine publication in 1927, two years after the author’s death, so this Stobbaerts-illustrated edition, with a selection of the verses, came very soon after any awareness that they existed.

The twenty bright and colourful Stobbaerts illustrations are pure art deco with clear cubist influences, their tongue-in-cheek quality perfectly complementing Louÿs’ ribald verses. They appear to have been produced using stencils, with a small amount of hand-colouring added. They are certainly ‘very free’ (‘très libre’) as the French would say, among the most explicit depictions of sex of the period. It is interesting to see them alongside one of Stobbaert’s watercolour sketches, La partie de cartes (The Card Party) of 1925; he clearly had an interest in the social activities of the period as well as the artistic ones.

The Stobbaerts-illustrated portfolio of Pibrac was privately published in a limited numbered edition of 250 copies. Twelve of the twenty illustrations were reproduced in poorer quality in a 1933 reprint by Paris publisher Marcel Seheur, and again in the 1940s.