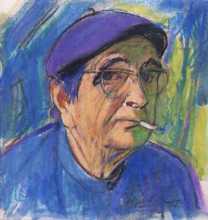 Milivoj Uzelac was born into a Serbian family in Mostar, which was then part of Austria-Hungary. In 1903 the family moved to Banja Luka, where he started drawing and painting under Pero Popović, a student of Vlaho Bukovac. There he met fellow artist Vilko Gecan, with whom he developed a lasting friendship. Uzelac’s father died in 1911, and the following year his mother took Milivoj and his two sisters to Zagreb. In 1912–13, Uzelac, together with Vilko Gecan, attended the private art school of Tomislav Krizman, where they encountered the work of Miroslav Kraljević, who was to become a significant influence on the art of their generation. At the age of sixteen Uzelac passed the entrance exam for the College for Arts and Crafts, and spent two years studying under Oton Iveković.

In 1915 Uzelac moved to Prague, where he worked in the studio of the painter Jan Preisler while attending classes at the Academy. He was later joined by Vilko Gecan, Marijan Trepše and Vladimir Varlaj. After the war the four returned to Zagreb, where they exhibited their work at the Spring Salon. In the autumn of 1920, the Artists’ Association allotted Uzelac a studio in Zagreb, where he produced some of his strongest work. In 1923 he moved to Paris, taking up his residence in the suburb of Malakoff. He painted extensively, and absorbed the current ideas of Classicism and Cubism. He fitted well into his new surroundings, receiving commissions and successfully selling his work. Only one year after his arrival, he entered four paintings into the Salon d’Automne.

Uzelac’s success led to his first solo exhibition two years later at the Marguerite Library. He was working hard during the day, and living a full social life at night. Success brought prosperity, and he socialized with many influential people and collectors, as well as with beautiful women. In 1928 he moved from the suburbs into a studio in Montparnasse, and in 1930 met Rosemarie da la Rayere, who was to become his permanent model and partner in life. From 1935 they increasingly spent time in the south of France, and in 1963 the family moved to Cotignac in the hills of Provence.

Uzelac and his fellow painters were important forerunners for Croatian modern art. They combined new ideas of Jugendstil, Symbolism, Secessionism and Expressionism from Germany, and Manet, Cézanne and Cubist ideas from Paris. After his move to France in 1923, Uzelac produced an extensive number of works in a wide range of techniques, created decorative panels for private homes and public spaces, and made stage sets, posters, illustrations and ceramics. He painted portraits, landscapes, street scenes, cafés and scenes from private life with an ease that could sometimes appear superficial, but he was a master at shaping the human body, particularly of women.