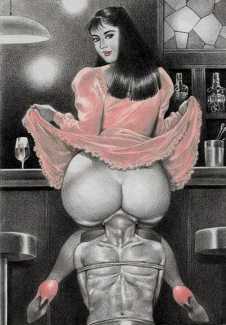 Born in 1947 in Osaka, Harukawa began to create fetish art in the 1960s and 70s. Starting around 2000, Harukawa became widely recognised through a collaboration with Madonna, who shared his work online, as well as Japanese avant-garde figures such as Shūji Terayama and Onoroku Dan.

He cut his creative teeth at the Japanese pulp magazine Kitan Club (奇譚 クラブ), which specialised in sadomasochistic content. Although his birth name is unknown, it is said that the artist adopted his moniker Namio Harukawa by merging an anagram of Naomi (ナオミ), a novel by Japanese novelist Tanizaki Junichirō, with the name of his favourite Japanese actress, Masumi Harukawa (春川ますみ), best known known for her role in Shōhei Imamura’s Unholy Desire (Akai Satsui, 赤い殺意, 1964), in which a devoted wife takes on a new life after being assaulted.

Very little is known about the enigmatic artist’s personal life. Even his age is debated – he was believed to have been either 72 or 73 years old when he died.

Interestingly, Harukawa’s work is not only enjoyed by what might loosely be called an audience of submissive men. It has also been praised and probed by feminist scholars looking at the role of submission and gender in sex. In a recently-published book titled Namio Harukawa (Baron Press, 2020) academic and art curator Pernilla Ellens analyses Namio’s work in an essay, Take My Breath Away, where she addresses themes of body positivity and representation to make a case for the genius of Namio’s pencil illustrations. She explores the portrayal of male subjects throughout the artist’s work, where the men are mostly faceless, insignificant and emasculated, ‘there solely for the pleasure of the female subjects.’ Matthew Holroyd, co-founder of Baron Press, explains that ‘this is in huge contrast to the way men have power in our patriarchal society. Whilst the artist’s primary intention for the work are his own fantasies, his work has found new contemporary relevance from feminists, fat liberators and queer people. Fatphobia is turned on its head, and big women are not seen in as unattractive, rather they are depicted as beautiful, glamorous, and above all having a great time.’

You can purchase the Baron title directly from the publisher, whose website you will find here. 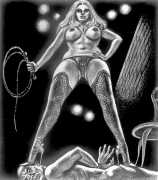