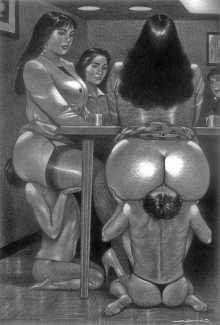 We have called this large and representative collection Namio Harukawa’s drawings Garden of Domina, after a story he both wrote and illustrated that was published by Pot Publishing, Japan, in 2012.

Garden of Domina: An Enterprise of Domination (Emonogatari Domina No Sono, 絵物語 ドミナノソノ) tells the story of Ohara Kana, a former volleyball player turned model. She capitalises on the filming of an advertisement for a cosmetics company to awaken the employees to the joys of domination. She becomes a director and opens a beauty salon, with services provided exclusively by masochistic men, creating a theme park run by slaves and a company that rents out slaves to select women clients. The drawings depict scenes of women sitting on top of submissive men, ignoring and crushing them while enjoying drinking a glass of wine with friends, smoking a cigarette, or reading.

We have chosen drawings from all of Harukawa’s output, which amounts to well over a thousand published artworks. As is only to be expected, other and less talented artists have often copied the style, so be wary of crude ‘Harukawa’ drawings being passed off as the real thing.