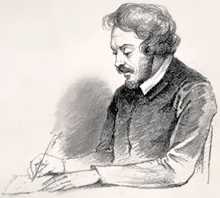 Paul Gavarni is the pseudonym of Hippolyte Guillaume Sulpice Chevalier, a Parisian artist who became one of the best and most popular engravers of the mid-nineteenth century. It is thought that he took his name from the town of Gavarnie in Luz-Saint-Sauveur in the Pyrenees, where he spent time in his early twenties.

Gavarni began work as a mechanical assistant in a machine factory, but saw that to make any progress in his profession he had to be able to draw; accordingly in his spare time in the evenings he took classes in drawing. He devoted particular attention to architectural and mechanical drawing, and worked at land surveying and mapping, which led to his obtaining a position with the Government Ordnance Department as a draughtsman. It was only in his early thirties that he turned his attention to creating drawings for publication, and his first published drawings appeared in 1834 in the magazine Journal des modes.

In 1849 Gavarni visited England, and on his return his impressions were published in the book Londres et les Anglais, illustrés par Gavarni, with many also appearing in the weekly paper L’Illustration. During the later years of his life Gavarni was much engaged in scientific pursuits. He submitted several papers to the Académie des Sciences, and was particularly interested in the question of aerial navigation, experimenting with different methods of navigation in balloons.