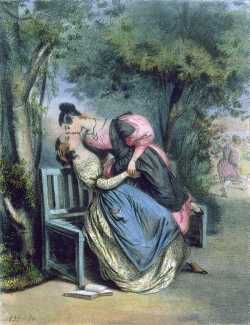 As well as creating illustrations for books and magazines, Gavarni also produced numerous portfolios of engravings on social and domestic themes, which were very popular with his wealthier clientele. Scènes de la vie intime (Scenes of Intimate Life) was one of the first of several such portfolios of loose prints, and if we discount Le cabinet noir was probably the closest he went to being explicitly sexual. The twelve engravings are certainly suggestif, even though only two include naked bodies, those being the ‘acceptable’ Adam, Eve, and the painter’s (bored) wife. Maybe the most interesting print in the series is the second, ‘Amitié de pension’, depicting two young women kissing. It is one of the most natural scenes of lesbianism produced in the early nineteenth century, and is known in both monochrome and coloured versions.