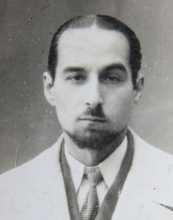 The reclusive French painter and sculptor Raoul-Roger Ballet lived a life of two halves. Having grown up in Aix-en-Provence, he went to live in Paris in 1925, where he became an active participant in the city’s artistic life and created paintings and sculptures, often based on mythological themes. Exploring mostly abstract art, he exhibited paintings at the Salon d’Automne and the Salon des Artistes Indépendants between 1929 and 1933.

During the second world war he met the painter and writer Madeleine Soulat (1909–74); they married in April 1945 and bought the semi-derelict Château de Celon, south of Châteauroux in central France. Here Ballet created wood-carved sculptures, and decorated the walls of the chateau with colourful mythological frescoes featuring an imaginative amount of nakedness.

It would seem that Madeleine was both the better and the more successful of the couple, and though they had a son, Roland, in 1948, they divorced in 1956 and Madeleine went to live in Saumur, where as well as illustrating children’s books she led a team designing and painting toy soldiers for the well-known CBG Mignot brand.

The privately-published La salle de garde is the only book Raoul-Roger Ballet illustrated, using the pseudonym Raoul d’Aix after his original home town. He continued to live in the Celon chateau until his death at the age of 99. Apart from the colourful frescoes which adorn several of its large rooms, he appears to have produced very little in his last decades. The fifteenth-century Château de Celon is now a conference centre, and Ballet’s frescoes can be seen by appointment – the chateau’s website is here. 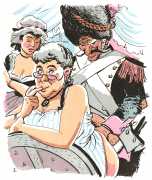 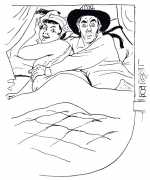