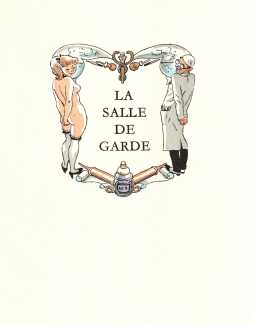 In France the bawdy song is intimately linked with the medical profession, more particularly the world of the hospital. They are commonly called chansons de salles de garde or duty-room songs, the duty-room being the common room where young interns rested when on call. It also served as a refectory where they took their meals together, and sometimes staged boisterous parties. It was for many years a predominantly male preserve, though more recently the duty-room has become increasingly inclusive, and female interns these days are usually willing participants in such revels rather than coerced nursing staff. Here the interns sang about drinking and loose women, the heightened joie de vivre helping them to accommodate themselves with the closeness of illness, suffering and death. In these songs there are constant references to every form and deviation of the act of sex, as well as prostitution, venereal diseases, and scatology.

This collection of twenty-four such songs, presumably chosen by Ballet himself to illustrate in a rather coy early 1950s manner, is just a small selection from the two hundred or more recorded chansons de salles de garde.

La salle de garde was published ‘Aux dépends d’un morticole’ (at the expense of a quack doctor) – almost certainly by Ballet himself – in a limited numbered edition of 374 copies, of which 50 included both the coloured and uncoloured versions of the illustrations.