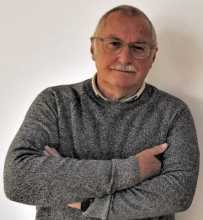 If you search for a local Cornwall (the south-westernmost county of England) artist called Stephen Prince, you will find a ‘painter of modern abstracts, who was born in Essex and studied art at the Central School of Art, London. First discovering Cornwall on a camping trip during his student days, he has been living and working in Cornwall since 2006, first in St Just in Penwith, and now in Penzance.’

Each viewer will form their own relationship with Stefan Prince’s erotic work, but typical is that of the artist and photographer Noel Myles, who writes ‘Is there a visual equivalent to being out of breath? I imagine mopping my perspiring brow, feeling slightly dizzy at events that are beyond my control. You are not allowed to take it easy or let your mind wander. In these cramped spaces there are no visual escape routes. Even the stars turn you back. There is a pressure in Stefan’s paintings that I haven’t seen elsewhere. This is caused by something other than the powerful subject matter. It is the paint that makes these scenarios come off the canvas and into my room where I watch. It is the drawing, the structure, the colour and the brush-work that makes these actors invade my personal space. How is this achieved? The middle distance is placed on the picture plane; often a strong, intense advancing red, with the background just behind it. The result is the foreground, with its luminous greens, tactile pinks and slippery blacks, stands in front of the picture plane. When a door opens it opens into your own room, not into the picture, and these people are about to come in without knocking.’ 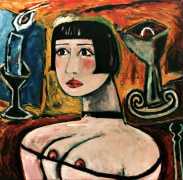 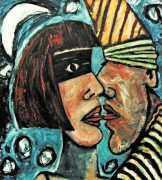 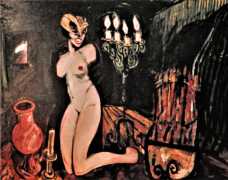 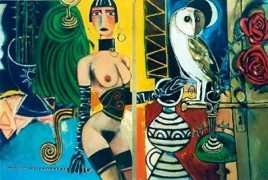 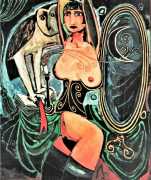 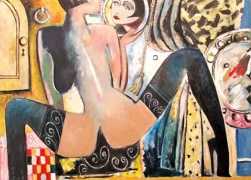 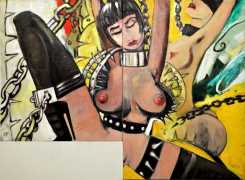 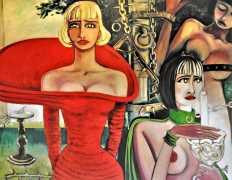