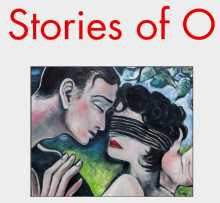 How Histoire d’O came to be written, revealed long after its publication by its true author, Anne Desclos of the Nouvelle Revue Française (where she used another pseudonym, Dominique Aury), to have been written by her to impress her writer and critic lover Jean Paulhan, is fascinating in itself – both that a woman could write such a Sadean tale, and that it became such a success so quickly, attracting literary prizes and obscenity charges in equal measure.

Prince first read the book in 1974, shortly after it was published in Britain for the first time, and as he explains, ‘For more than forty years The Story of O has haunted my imaginings, and persistently altered my course as an artist. My first attempts to create images of my own inspired by the book, in 1978, were faltering and inconclusive. Another attempt a few years later resulted in just two small paintings. It was not until 1996 that I found my way to realising a personal vision. The result, once I had found my feet, was a substantial series of large canvasses dominated by reoccurring motifs that altogether amounted to twelve Stories of O. They were never exhibited as a complete set, but several were exhibited in London at the Coventry Gallery and several more found their way into private collections in the UK and on the continent. One painting found a place on the set of the feature film Preaching to the Perverted, and was glimpsed not only near the end of the film but also on an early edition of TV’s EuroTrash.’

Stefan Prince has created a website devoted to art related to Histoire d’O, which you will find here, and he also writes a regular blog on the same theme, together with recent examples of his work, which is here.