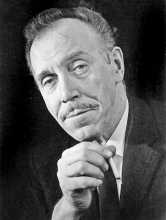 Touko Valio Laaksonen, who has been called the ‘most influential creator of gay pornographic images’ by cultural historian Joseph Slade, is universally better known as Tom of Finland. His enormous and highly original output exceeded 3,500 images and more than fifty comic books.

In 1956 Laaksonen submitted drawings to the influential American magazine Physique Pictorial, which premiered the images in the 1957 Spring issue under the pseudonym Tom, as it resembled his given name Touko. In the Winter issue later that year, editor Bob Mizer coined the credit ‘Tom of Finland’. The post-World War II era saw the rise of the biker, and Laaksonen’s drawings of bikers and leathermen capitalised on the leather and denim outfits, featuring gay men who were untamed, physical, and self-empowered, in contrast with the prevailing mainstream straight perception of the time of gay men as sad and oversensitive.

Laaksonen’s style and content in the late 1950s and early 1960s was in the ‘beefcake’ genre, attractive, muscular young men in athletic poses. Their primary market was gay men, but because of the conservative and homophobic social culture of the time, gay erotica was illegal in most countries. During this period Laaksonen was mostly working with private commissions, and his more explicit work remaining unpublished. In 1968, however, he found a market for his work in comic books, including a popular series featuring Kake, a dark-haired, moustached leatherman, who in a series of twenty-six comic books travels the world on his motorcycle to spread the seeds of ecstatically explicit gay sex.

In 1979 Laaksonen, with businessman and friend Durk Dehner, co-founded the Tom of Finland Company to preserve the copyright on his art, which had been widely pirated. In 1984 the Tom of Finland Foundation was established to collect, preserve, and exhibit homoerotic artwork. Although Laaksonen was very successful at this point, with his biography on the best-seller list, and Benedikt Taschen, the world’s largest art book publisher reprinting and expanding a monograph of his works, he was still most proud of the Foundation.

In 2009 Taschen published an exhaustive survey of Laaksonen’s work, with guest essays by Edward Lucie-Smith, Camille Paglia, Armistead Maupin, Todd Oldham and John Waters, entitled simply Tom of Finland; it includes over 1,000 images covering every period of the artist’s output.

The Tom of Finland Foundation, based in Los Angeles, can be found online here – as well as keeping Laaksonen’s work alive through exhibitions and publications, it hosts the ‘Tom of Finland’ room at 1421 Laveta Terrace. 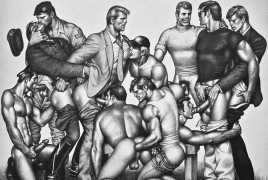 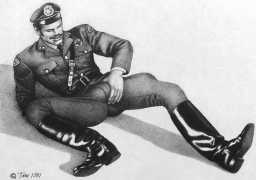 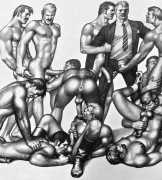