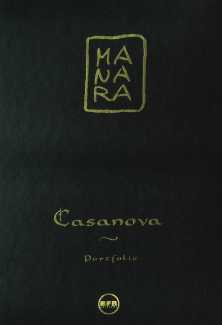 We have included this limited edition portfolio of Manara’s paintings to demonstrate that as well as being a consummate cartoonist he has not forgotten his formal art training, and is as comfortable producing a large painting as he is a small drawing.

The exploits of the great lover Casanova had long been in Manara’s mind, especially once he became friends with Federico Fellini and watched Fellini’s 1976 prizewinning film version of Casanova starring Donald Sutherland and Tina Aumont.

The BFB edition of Casanova was produced in a signed and numbered edition of 450 copies.