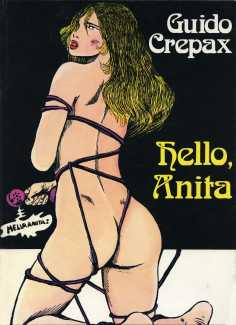 Anita first appeared in Crepax’s work in 1974, with further episodes in 1979 and 1989. Anita is still a Crepax woman, voluptuous and wearing as little as possible, but she is less troubled by aliens, humanoids and robots as by technology. In the first Anita episode it was the television (in English Anita Live), in the second the telephone (Hello, Anita), and in the third and final one the computer (Input Anita).

As Beppi Zancan explains in his introduction to Hello Anita, ‘Crepax uses Anita to create an episodic comic, a multi-stanza ballad that has two parallel meanings: one very pleasant and highly erotic, the other dramatic, exploring the violence of the mass media on us, means of communication from which we all suffer daily. Thus Anita is raped by the telephone, compromised in an incessant sexual relationship which leaves no room for any other life. She surrenders, becoming its docile partner. Crepax shows how these infernal machines have the power to tear us away from ourselves. It is not a question of telephone sex, this is sex with the telephone. There are many things that do us violence on a daily basis, and sometimes, like Anita, we are not very aware of them.’

As well as being Crepax’s exploration of his character’s relationship with technology, the Anita books explore his rare relationship with colour, leaving us wishing he had worked more with it. As Sarah Horrocks writes, ‘Anita  is useful for seeing how Crepax plays with colour, and the Anita series was his high point. Here he uses colour as more of a texture than as an expression of a particular palette. Even though the series is in colour, there’s more blank white space in Anita than you typically see in most full-colour comics. The emphasis is more on the technique of the application of the colour than the actual colour he’s using, even though that colour does express itself powerfully. There are some really amazing portions of Anita that take the form of an inky watercolour which is almost ejaculated across the page.’

Here we show the final pages of the French edition of Hello Anita, in which Anita finally frees herself from the tentacles of the telephone cord.