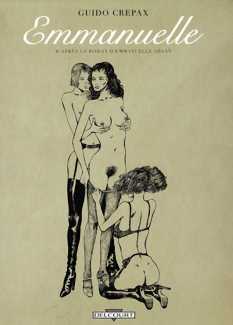 Crepax presented his Emmanuelle volume in a variety of different ways, including extreme contrasts of black and white, and pages with minimal shadow and exotic framing. In contrast with the film, whose aesthetic was essentially that of fashion photography, Crepax remained faithful to his style of cinematic framing and montage, expressive details and narrative inflected by the varying size of image. His version of Emmanuelle, almost of necessity, retained the legendary wicker peacock-chair featured in the poster, but is otherwise quite uninfluenced by the iconic status of the film.

The Crepax Emmanuelle was published by Delcourt; the English-language version was included in the Taschen Evergreen compendium of 2000 which also includes Bianca and Venus in Furs. We have included the first twenty or so pages to give a flavour of Crepax’s graphic techniques.