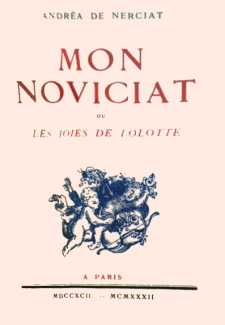 Mon noviciat, ou les joies de Lolotte (My Novitiate, or The Joys of Lolotte) is a 1776 novel by André-Robert Andréa de Nerciat, best known for his later Le diable au corps (The Devil in the Body). It explores many of the same themes as Jean-Baptiste de Boyer’s Thérèse Philosophe and Mirabeau’s L’education de Laure – how pleasure and sexual sharing can overcome convention and a strict moral code.

Unfortunately there has never been an English translation of Mon noviciat, but if you can read French there is a good online version to be found here.

Jean-Adrien Mercier’s illustrations for this edition show what can be done with a limited palette, especially the judicious use of pink.

Mon noviciat was published by Maurice Duflou in a limited numbered edition of 400 copies.