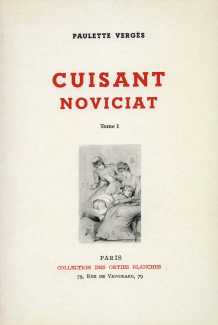 Cuisant noviciat (The Flaming Novice) is considered one of the classics of 1930s spanking literature, first published in two volumes in Jean Fort’s Collection des Orties Blanches (White Nettle Collection) and reprinted in excellent facsimile by Héliot Presse in 1990. The text is by Paulette Vergès, another pseudonym thought to be Beloti himself, though since Beloti is just as opaque as Vergès who knows the true identity of either author or illustrator? The only other time Paulette Vergès appears is as the author of another Beloti-illustrated title, Gouvernante et gouvernée, which does suggest an intimate connection. More confusingly, the two volumes give the name of the illustrator on the title page as Jim Black, Luc Lafnet’s pseudonym, though only two of the twelve are signed ‘Jim Black’, the rest being in a subtly different style attributed to Beloti.

In French ‘cuisant’ has a variety of meanings, from ‘flaming’ and ‘burning’ to ‘bitter’ and ‘ignominious’; in this well-written tale of learning to love the burning sensation of being spanked it includes all of the above, and the illustrations add just the right amount of piquancy.